“Erasure is not a trivial denial but rather the emergence of new meanings: the transformation of a negative gesture in a positive one”

Emilio Isgrò (Barcellona Pozzo di Gotto, Sicily, October 1937) is an Italian artist and writer, noted for his use of the erasure technique in his art works.

Isgrò, during decades, cancelled texts using white or black thick strokes, such as ants or bees’ swarms. He modified Autographs, novels, geographic maps, letters, philosophical treatises, musical scores, even the Italian Constitution… A meticulous ritual to bring new sense landscapes, new visual harmony, new horizons of language. To him, language is plastic matter, both tangible and intellectual. It’s something to model, to question, to subtract and regenerate. Something that constitutes ourselves as parts of large or small communities, making us free to communicate and, therefore, to be: in the others, over Time, in History.

Isgrò isn’t a nihilist. On the contrary the words he “destroys” becomes meaningfull, they are valued in their intimacy. His purpose is to aware the observer of the gesture he’s becoming part of. Only by knowing the language that is being used, the reality can be better understood.

The artist purpose is perfectly understandable with books, article, novels and other printed works. It is little more different when we’re talking about maps.

This is the only graphic-illustrated surface he erased during his career. The language of map is different. Rather, it’s exactly the same, but it’s used in a very different way. Indeed a map uses words to collocate geographical places, to locate cities and to name Country and continents. There’s nothing poetic in this language, but only scientific necessity.

In conclusion he used his technique with a different approach. This time he wanted to clean and free the way the observer look at the Earth. Human geography often prevail over a genuine, simple manner of seeing space. By releasing maps of they denomination, the beholder has the opportunity to recreate and start a new geography.

Emilio Isgrò gave a new opportunity to land and space. 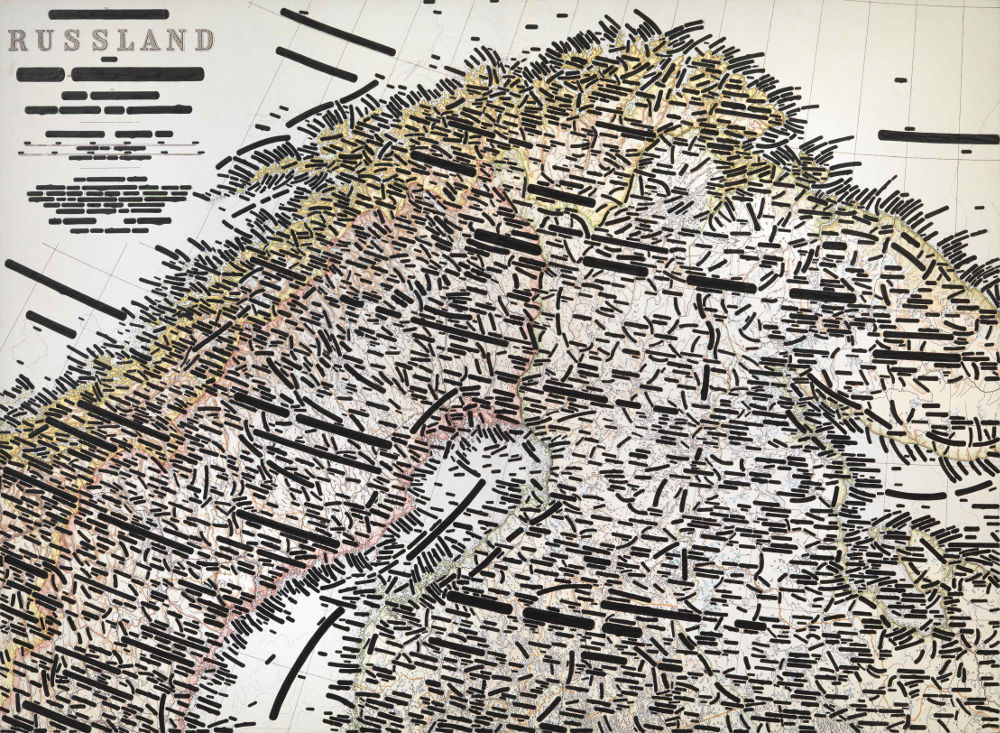